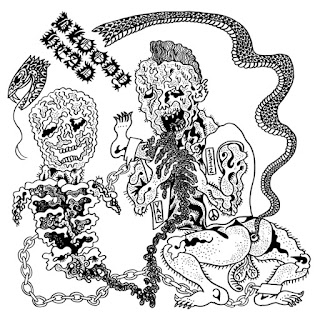 VRLG 13: Bloody Head LP out now
After loads of delays the Bloody Head LP is finally out! 5(6) tracks of primal punk dirge/existential terror. Recorded one afternoon at SOAN and mastered at Plotkinworks. The covers expertly block printed by The Print Project and feature some awesome/sick artwork by long time BH collaborator/minister of propaganda Vincent Ramirez Price. There are a few different color covers. Mailorder copies are either white or grey. Forever Records in Nottingham have some very limited green covers (exclusive to the shop) and some brown covers with bronze print only available from me in person at a BH gig or if I have my distro with me.

'Jesus the cave man once claimed “The Freaks shall inherit the earth”, but as king freak Larry Lifeless noted “Jesus was dumb”. When the bombs drop everyone knows it will really be the social media creatives. Year zero 2.0 but with more enamel pin badges and coffee mugs to flog to the cockroaches.
The Johnny come lately oligarch pimps will be on the last nuclear sub out of Phuket while you’re left on the beach being done up the coconut by Pol Pothead.
Your head’s in the clouds and your cock’s in the frying pan buddy.
Not so much “If the only tool you have is a hammer then everything looks like a nail”, more like when the only thing you own is a butt plug then the world probably looks like a whole lotta tight arseholes.
Is Armin Meiwes a new age philanthropist? The female eunuch with its balls in a meat grinder?
Or has the monkey finally divorced the organ and signed up on Grindr?
Will this record appeal to your  narcissist instagram model girlfriend? Would Vlad tepes be impaling his enemy’s with selfie sticks? Would that make a good enamel pin badge?'

The LP costs £10 plus postage. 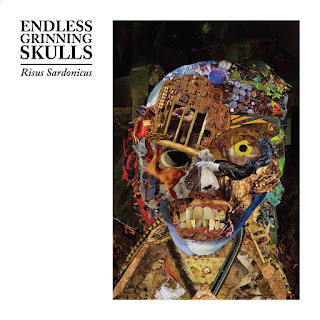 Here is what Noel Gardner had to say:
You won’t need a recap of why, how and when the world has become worse since 2011, the year in which Endless Grinning Skulls released their first, self-titled album. More helpful, though, might be the veneration of ‘Risus Sardonicus’ – the Nottingham band’s second LP – as a righteous, savage soundtrack for fucked-up times. Over 10 songs and 32 minutes, EGS reach deep into the history of protest-minded punk and hardcore, boiling down decades of experience and encyclopedias of knowledge into a red-hot slab of sound.

Don’t get it twisted, this isn’t some jejune “hey, at least all this business is gonna Make Punk Great Again, right guys?” garbage. Great punk never went away, and as it goes neither did Endless Grinning Skulls, despite the six-year stretch between albums. They’ve kept the fires burning with three seven-inch singles: ‘Fear, Ignorance, Control’ (2012), a split with Bristol thrash masters Violent Arrest (2013) and ‘Endless Grinning Spirits’, a 2015 tribute of sorts to the infamous Japanese hardcore subgenre ‘burning spirits’. As on that scorching two-tracker, ‘Risus Sardonicus’ finds EGS trading as a trio of Andrew Morgan (guitar), Alsastair Gordon (bass) and Steve Charlesworth (drums) – previous vocalist Patrick Lawlor has now departed, with mic duties now shared between the guitarist and bassist.
It’s clear from the off that the new slimline lineup retains all the heft and more on wax, Gordon charging in with a rust-throated attack over a powerful staccato guitar as ‘Neoliberal Towers’ opens ‘Risus Sardonicus’ at full throttle. At over four minutes, it’s practically an epic for a first track on a hardcore album, but keeps its energy the whole time. ‘Austerity? Violence!’ amps up the swirling noise, bringing EGS’ D-beat and classic Euro HC influences to the surface, but always feels controlled.
‘The Iron Cage’ delivers another jolt to the chest via tungsten-tipped guitar leads and crust-tastic snare rolls, while ‘Tubes’ is just under two minutes of righteous thunder that will boil the brains of anyone who loves the Swedish hardcore continuum, from Anti-Cimex onwards. A slower and groovier tempo is introduced on ‘Guilt Games’, whose sound harbours elements of classic anarcho, gothic rock and feedback-streaked dirge punk.
“I want to tell you a little story / True or not, you decide” begins ‘Septic Ascetics’, preceding a suite of lyrics raining hellfire on the Catholic church and its history of abuse and crookedness. A guitar solo that buzzes like a swarm of metallic hornets and spreads like a rash increases the pressure before ‘Crutches’, the shortest song on the album at 84 seconds, delivers a gnarly hardcore whack. “So cold… so fucking cold” intones Gordon on ‘The Pressure Of Life’: semi-spoken and sardonic, fitting like a glove with a riff that locks in from the start, doesn’t change its ways and doesn’t need to.
‘Rot’ ventures further inward with Morgan throwing out lyrical references to “paranoid confusion” and a “black dog barking”, over stirring, anthemic anarcho, before ‘Risus Sardonicus’ bows out in majestic style with ‘End Times’. Powered by thunderous drums and a cochlea-clawing noisepunk guitar tone, this closes the album over nearly six minutes and lives up to its can-hoarding title with an itchy intensity that’s equal parts Killing Joke and Rudimentary Peni.
This aural powerhouse arrives on 12-inch vinyl courtesy of Viral Age, Morgan’s own label. He’s also responsible for the sleeve art, a lurid and eerie collage work, and the ‘End Times Gazette’ leaflet insert, done in timeless typewritten cut’n’paste fashion. Made by three musicians with over 70 years’ collective experience (Charlesworth was a founder member of UKHC pioneers Heresy in the mid-1980s and was until recently in Geriatric Unit alongside Gordon; Morgan’s past/present bands include Army Of Flying Robots and Bloody Head), ‘Risus Sardonicus’ glows with love for the finest in guitarbassdrums noise pollution, likewise disgust for the rotten excesses of 2k10s society and the evil that men do. It would sound equally fresh, and equally powerful, in 1984 or 2024 – but it’s fresh out the oven in 2017, and all should hail Endless Grinning Skulls
I also have a new zine available called UNDISCLOSED SOURCES which contains some of my old cut and paste flyers for 593 collective gigs. A4, 24 pages, black and white.
£3 plus postage. 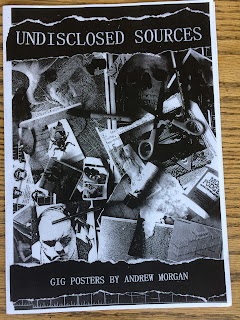 I have also updated the distro page with new stuff including Paranoid live flexis, Girlpower LP's, Thisclose 7"s and more.

So after a bit of a break VIRAL AGE is up and running again. I have been busy with work/family/real life stuff along with playing in 2 bands and doing more artwork. As a result the label/distro have taken a back seat lately. I hope to remedy that and pick things up again from now on. The distro has been updated with loads of killer stuff, including the brand new BLOODY HEAD cassette album and a bunch of staff from HARBINGER SOUND and lots more.

In other news I have a new release due very soon, which I am really excited about.
VRLG 12: ENDLESS GRINNING SKULLS - RISUS SARDONICUS LP is at the pressing plant and should be out early April. We have been working very hard on this release for a long time and we cant wait for people to hear it. More news on that soon.
Posted by AM at 11:07 3 comments: 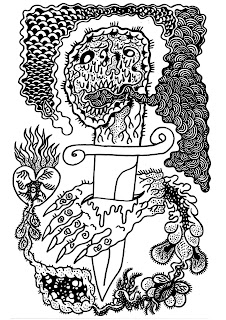 Bloody head is a new band I do with some old Notts heads. 100 cassettes with various colour covers and tracing paper insert. Includes bandcamp download. 8 tracks/30-odd minutes of RAW POWER/primal dirge. Artwork by Jerry PRice.
LISTEN
"The primitive carnal soundtrack to a one way Booze cruise to sodom and Gomorrah. Below deck, through the dry ice and tears, emerges an endless sea of grotesque flesh writhing around to the flashing disco light show like blind mole rats on MDMA. Serenading this vision of ugly hell, the house band  churn out a feral dirge of half forgotten bedsit cock rock
and Californian hardcore,  while the weird guy with a degree in philosophy who's meant to be cleaning the bogs goes full on existential Rambo over the top of it all."
-Jerry Price, 2016

VRLG 10.5: HARD TO SWALLOW - Protected by the ejaculation of serpents 'official bootleg' 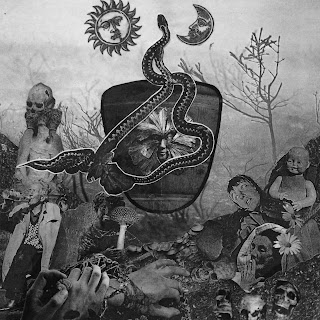 I still have a handful of copies of this for sale. Hard To Swallow's classic album with new cover designed  by me. The story: Bloody Kev sourced a couple of boxes of dead stock copies of the Household Name press of this record and asked me to redesign the cover. 70 copies only.
£10 plus postage.
Posted by AM at 03:28 6 comments: 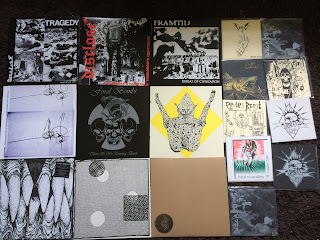 I have very limited quantities of this stuff 1-3 copies!
Posted by AM at 09:23 2 comments: 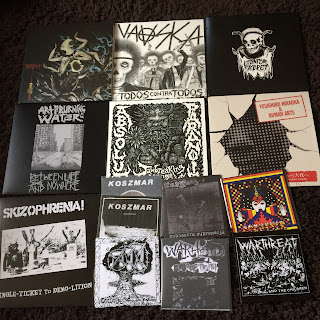 I also have some leftover PARANOID merch from their UK tour - LIMITED QUANTITIES!!!! 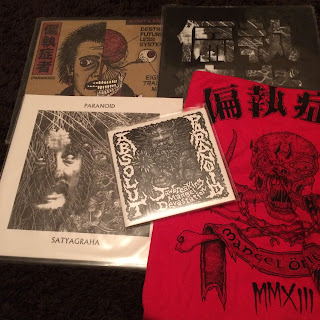